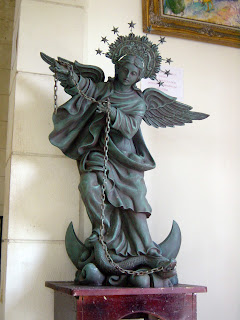 When I was pregnant with my son, I asked a friend with an almost two-year-old what parenting was like. I knew it was too broad of a question, but I asked anyways.
My friend thought for a moment. Then she said, “Hard. And amazing.”
One of the great, continuing lessons of my life has to do with the grey area. With understanding and accepting that nothing is just black or white. That we constantly hold a myriad of aches and joys, triumphs and tragedies, struggles and success.
Take, for instance, yesterday. We took the kids up to Freeport to have lunch with friends and to procure preschool supplies for the kids. Towards the end of our trip, none of us were happy. And we still had 45 minutes to wait for our son’s backpack to get monogrammed.
Our two-year-old daughter was about an hour past her naptime and proceeded to screech and weave through the crowd of shoppers unless she had the giant L.L. Bean bag containing her new pink rain pants strapped over her little shoulder. Max was whiny.
I hadn’t imbibed my daily quotient of caffeine, and soon I was whining, too. My husband was done with all three of us. Strangers were giving us that look. The can’t you control your horribly behaved children?!? look.
It was hard. Not in a ‘capital H Hard’ way, like with natural disasters or serious illness. More in a why did we decide to take the little crazy people shopping kind of a way.
Finally, Max’s new shark backpack was emblazoned with his first name and last initial, and he was so delighted that he cuddled it all the way home, where the kids and I all napped.
Amazing.
When we got up, we were mostly refreshed. The Kastaways, the mascot band that plays for the local Portland Sea Dogs baseball team, was scheduled to make their last appearance of the season. Max loves music—it is his thing. And he’s been infatuated with the Kastaways since he first heard them play last summer at his very first baseball game. After which he began talking about them constantly.
The thing is, he has always liked the idea of them more than the reality. Often, when we go to hear them play, he just stands there watching, looking slightly frozen and cowering if any of the mascots approach him. The rest of us usually sway and enjoy the chance to hear some live music. You wouldn’t guess by looking at Max standing there on the crimson bricks outside of Hadlock Field that this would be the moment he would talk about for weeks to come. “Tell me about the time we saw the Kastaways and that boy had a birthday and the Kastaways sung ‘Happy Birthday’ to him,” he would say at bedtime. Every night.
Having been a shy child myself, I find it slightly heartbreaking to see him scared and holding back from one of the things that most brings him alive. The thing he talks about all the time and replays in his head and with his words. Often. It is one of those soft spots from my own life that I have to watch out for—it’s far too tempting to try and parent from my own wounds. I have to just let him, sometimes, be scared and frozen and trust that he, like we all are, is on his own path.
So last night, when we decided to go see the Kastaways, we expected him to be shy and tentative. But I actually did the unthinkable anyways; I woke him up from his nap so we could make it in time to see them play. “Maxie,” I said, lowering myself to his bed. His eyelids fluttered, then dropped. “Do you want to go see the Kastaways play for the last time this season?” I whispered. His eyes grew round, and he sprung up, rubbing his eyes. “YEAH!” he said.
When we arrived at Hadlock Field, the Kastaways were taking a break between sets. We sat and waited, while hundreds of people headed in to watch the actual baseball game. Finally, we heard the telltale sound of the musicians saying, “Check,” into their microphones. Sir Nigel Rathbone the Wharf Rat, Spike the Porcupine, Clarence the Clam, Pete the Puffin and Herman Dean the Power Hog strutted by us. They introduced themselves and began to play. I watched a huge grin slide over Max’s face as they started playing “Centerfield,” Max’s favorite. Within moments, Max was tapping his feet and spinning around.
Then, the lead singer, Sir Nigel Rathbone the Wharf Rat, beckoned for Max and another little girl to come up and dance in front of the area where they were playing. I was stunned when our guy headed right up. As the music started, Max started busting out donkey kicks and rock lunges to “Twist and Shout.” He danced for several songs, the sound of the keyboard and drums propelling him. He was wholly in the moment. In his body. In the music. It was beautiful, and it brought me more into the moment, too. My boy—my sensitive, determined, mercurial boy—let the music pool and swirl inside him as dozens of people streamed by. 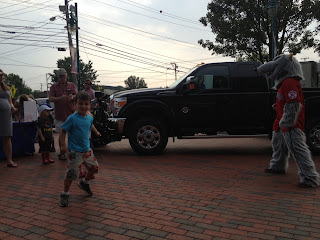 I watched him, and I watched my husband, who was videotaping the moment. I watched the faces of the other people in the audience, smiling at my son’s freedom. I felt like the late August sun was shining right down into my chest, soaking my heart. 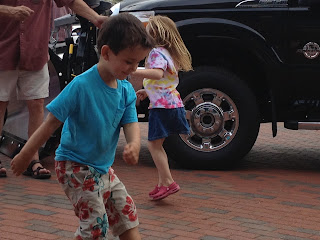 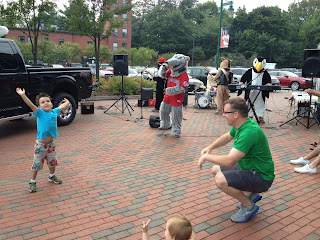