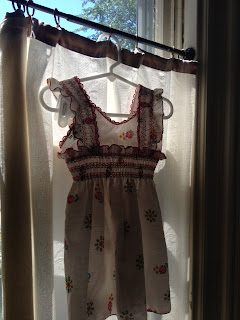 “Do you want that little sundress for Vi? The one you wore in Spain when you were little?” my mom asked yesterday morning.
My mom disappeared into the basement for several minutes, then came back holding it. The small white dress boasted Spanish looking red and green embroidery and was sprinkled with pink and yellow flowers. Knowing how toddlers roll and knowing how messy I am, I found it hard to believe that I ever actually worn it, and that it survived for nearly four decades, pristine. It didn’t feel like it had been mine.
We wrangled Violet into the dress, and she prettily strutted around my parents’ condo. I looked at my mom, who has olive skin and dark hair and eyes like I do. We watched Violet and I pondered, as I often do, how this little sparkly little blue-eyed, paper-white skinned, reddish-haired girl could have sprouted from my body.
Last week, when my son was sick, I laid next to him on the couch. He was a bit sour smelling from throwing up, and he was sweaty and vacant-eyed. But when I snuggled in with him, my arms sticky from his feverish skin, I thought we belong to each other.
I don’t feel always feel the same way with my daughter. Maybe it is because she’s younger and we haven’t had the time together that Max and I have. Maybe it is because Max and I braided tightly together through the hell of his infancy. Or because Max and I are both stubborn, intense and sensitive. Or because he looks so much like my brother.
Maybe it was because Violet was a surprise. I found out I was pregnant on April Fool’s Day. At first, it did not feel like a happy surprise or a zany turn of events. The timing felt bad, and the hormone surge of the new pregnancy sucked me into a depression. Combined with the constant nausea and exhaustion while trying to take care of a spirited two-year-old, the pregnancy felt like something I couldn’t survive.
I considered ending the pregnancy. Every morning when I woke up and the nausea and thick wall of depression met me, I said to my husband, “I can’t do this.”
He said, “You can.”
I said, “I feel like I can’t and I need you to be okay with that.” He would hug me and try to meet me where I was, but if you have ever experienced depression, you know that people can’t really meet you where you are. It is a foggy, shrouded place that spouts a constant stream of distorted thoughts. You look like yourself, but inside is the worst version of you, lost and dark.
Whenever I drove by Planned Parenthood, I would stare at the building and wonder if I would be walking through those doors the next week.
I told my therapist about my doubts. “Thirty-seven-year old married people don’t get abortions,” I said.
“They do. They absolutely do. Far more often than you would think,” she said. She had sat in her chair talking with clients for many, many years, and when she said that, I believed her.
One day when I drove by Planned Parenthood and stared, I thought but what if this is my little girl? I let my fingertips touch my belly, imagining the small seed of a baby instead of a detonating hormone bomb. I made some phone calls and got medication for the nausea and depression.
I survived.
We survived.

When she was born, the midwife placed her on my chest. “Is she still a girl?” I asked.

I had always imagined a daughter. She would have my dark features and be sensitive and creative. She was tiny and light in my arms. She had pale skin and blue eyes. We took each other in.

In the first weeks of her life, we had a terrible health scare with Violet. I will write about it someday. The scare made me feel she was even more slippery, less mine. I thought that perhaps I just didn’t deserve her, since I once contemplated not bringing her into being.

On the Fourth of July, Violet woke up in full diva mode. She is usually independent with an easy laugh. Her eyes hold a hint of mischief. She is one of those bright spirits who it just feels good to be around. But yesterday, she started squawking demands and displeasure from the moment I pulled her from her crib.
We headed to Peaks Island to be with Scott’s family for the day. Max pranced around outside with his cousins all day long. Violet clung to me. She took quick breaks to demand cantaloupe and snap peas and cookies. I sat with her, feeling both delighted and agitated to be so tethered.
The kids’ uncle James gave us a ride back to Portland on his lobster boat. Max got to steer the boat for a few minutes, and he looked proud and wide-eyed. Violet was terrified. I held onto her tight. I had a quick dark thought of her slipping into the water. I locked my arms around her. She was still wearing my dress which was now her dress, and I felt the soft fabric and her softer skin and I thought I will never let you go. And as soon as I thought it, I knew it was a lie. I will let her go a thousand times throughout her life.
As we rushed through the glittering sea, I tried to swallow the moment. Surrounded by family, still young and lovely. My boy, proud and awed. My husband, strong and handsome, glued to Max to keep him safe. Such a good father. My girl in my arms, the surest place she knows. Just for the moment, they were all mine. 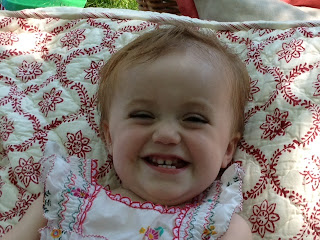 Tweet
Pin
Share
+1
0 Shares
« Circles: What I want my son to know about death
The Elephant in the Room »