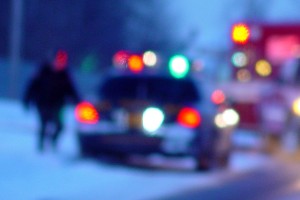 Last week wrapped up with a medical emergency with a close family member. I spent time sitting in hospital rooms, alternating between cracking jokes and worrying. It all turned out as well as it could have, but there is something about entering a hospital that re-centers me.

It reminds me that my day, my world, my life—most days—is amazing. Abundant. Moments get taken for granted while I get caught up in twists of moods and thoughts, but sometimes—sometimes I sit still and breathe it all in. The otherworldliness of a hospital shifts everything into perspective. I leave my usually messy house where the demands of young children leave me sometimes feel like I’m losing my mind. Upon entering the right-angled world of the hospital, the too-long hallways and antiseptic smells, the world where broken bodies lie on white cloths, and bad news flows as swiftly as gossip—I breathe. My vision shifts, sharpens.

There was a moment when I looked out a window of the hospital I was in and saw the nearby hospital where my babies were born. Through the window, the squat brick building looked so small. When I was in labor, the whole world was right in those minutes, in the belts of pain, in my husband’s hands patting my forehead with damp cloths, in the first looks at my babys’ faces.

Looking out the window, waiting for the elevator that would take me up one floor to hear good news or bad news, I thought I am so glad I get to be their mom. So often I think and write about how rough it still is to adjust to being a parent, to being so tethered, so responsible, for little people. There’s so much pressure. So the thought hit me like a sweet breeze, refreshing, reframing.

Everything with my family member turned out as okay as it could.

Monday brought another close call. A friend, her toddler daughter, my two kids and I. In the sunshine, we crossed a wide street towards the bright blues and reds of a playground.  We slowed our pace as a car heading our way wasn’t slowing. My kids both walked with me, while my friend held her daughter. Surely the small, fast car would stop—the driver couldn’t help but see that a little gaggle of women and children were trying to cross the road. For a moment it seemed like he was going to slow down, but then he sped. We were still in the opposite lane, but it was way too close. Way too fast.

“Are you serious?” I yelled. My friend yelled something similar, and I heard the pause in both of our voices as we stopped ourselves from swearing. My son Max looked at me, his eyes big and round.

“I thought that car was going to squish us,” he said. “He wasn’t a very good driver,” he added.

“Yeah, he wasn’t be careful at all,” I said. My heart pounded.

“I can’t believe he didn’t stop for us,” Max said.

Max continued to talk about it for several minutes before giving into the lure of the playground.

The day continued. Max performed his choreographed version of “The Fox” to my friend, improving a new move—the double nipple pinch—which made my friend and I laugh, which in turn made him do it approximately 963 more times. When we got home, he made up a game called “Golden Footsteps” where he spread yellow orbs of paper across our lawn and Violet and I followed the “footsteps” to find him. It was kind of genius, and far more fun than when my kids make me play Power Rangers, and I kept asking, “Did you learn this at school? Are you sure?” It was a good, fun day with small exceptions, like when he got jealous and hit me with a stick.

For a while, we forgot about the car.

Max brought it up again at bedtime.

“He was a really stupid driver,” he said.

“Well, he was a very careless driver,” I responded.

I wanted to tell him I would always protect him. That I would never let anything bad happen to him or his sister. But I try to tell the truth to my kids as much as possible, and so I let the words stay in my head, a wish.

“What does ‘careless’ mean?” He asked. I answered him, and then he went on to ask me to tell him embarrassing stories.

The car incident had fallen to the back burner of my mind the rest of the day, (right next to eighty-five organizational projects, a plan to purge my old journals, and learning to cook) but like Max, my intense thoughts often surface at night, when my body is finally still. Alternate endings to our close call blazed through my mind. I chastised myself that I hadn’t been holding my toddler daughter—it was too easy to think that she could’ve kept walking as the car sped towards us. Terrible bloody scenes flashed in my head. Bruised still bodies. Silent screams.

My life has been free of tragedies for the last several years. But the years between mid-twenties and my early thirties did a number on me. My brother died, then two dear friends, my godmother, two grandparents and my first love. I started to feel like I was cursed, and everyone I loved would be taken from me, and sooner rather than later. I stopped trusting life. I thought of all the body parts that can go wrong, of ticking tumors and busted bodies. Whenever the phone rang, I half expected more bad news pouring to come screeching through.

Becoming a parent softens and opens everything. It unhinges more love and fear than I could’ve ever imagined. I’ve discovered, through talking with other parents, that I’m not alone in the dark imaginings of terrible things happening to my babies. The more swollen the love we have for someone, the more bulbous the fear of losing them becomes. And being a parent already prone to anxiety, and being a parent who knows firsthand that the worst can happen, means too many moments of metallic fear and worry.

Finally that night, I told myself everyone is okay. I let my shoulders down. I whispered a quick prayer, asking for my kids to stay okay.

And I’ve been trying to breathe in more of the moments. Last night I watched my son in his first performance at his preschool. He strutted up to the stage, beaming and waving to us, a natural performer. I watched my husband carefully weave our daughter’s hair into a series of connected ponytails. I played the kids’ favorite game for hours yesterday, the one where I’m a baby and they’re my parents. “Pretend you were just born,” Max said. I laid down on the floor on my back (Pro-tip: this is a great game for tired parents!) and said, “Ga!” about a hundred and fifty times while they pressed their faces to mine, the landscapes of their faces blurred and new and breathtaking.

Tomorrow might be a frustrating day, with the kids’ school closed and less time that I can write and be still and alone. I might forget these close calls. I might not be able to summon the feeling of bright green luck rustling around my edges. The ridiculous fortune of this moment, with most of the people I love healthy and safe.

But today I remember. Most days aren’t hospital days. Most days there are no phone calls changing everything, no police officers at the door. Most of our days go largely right, the same way that most of our body parts hum along, quiet and crucial: Sleek ivory bones, breath sweeping in and out, in and out, often without a second thought. Rivers of blood flowing out from our hearts to each nook of our bodies. So intricate, so unseen.

I have, at this moment, healthy kids. More love than I can measure.

I complain and forget, all the time. I’m learning to bring myself back, over and over again.

Today, I say thank you.