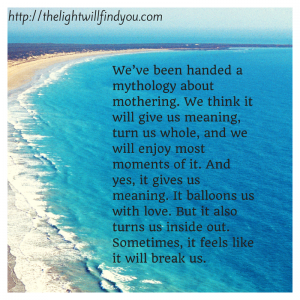 Before children, I had bad days. Don’t we all? Maybe it’s the blues that descend in the waning Sunday afternoon light as you realize you have to go back to work the next day, and your life is not your own. Or maybe someone you love is sick or your computer just shut down before you could save your story or the winter just won’t end. Or your boss or boyfriend or parent said something cruel that was also a little bit true and you can’t quite get it out of your head.

In my early 20’s, as my heart cracked from unrequited love and I tried desperately to figure out what I wanted to do with my life, I used to write down a phrase from Stevie Nick’s “Landslide” in my journal over and over again:

Clearly, I had some bad days back then.

But since having children, the bad days feel worse.

Perhaps it’s because the stakes feel so damned high. If I’m raising my voice too often, if my patience has evaporated and my kids are yelling and hitting and whining at the same time—it feels more like I’m failing at my most important job than having a simple, fleeting bad day.

Or maybe it’s because I can’t reach for the tools to help me feel better like I could before children—I can’t just tell my kids, “Peace out! I’m going to yoga. I’ll get you that snack in an hour or two!”

Today started off poorly. I’d planned a short, mini-beach excursion with a friend and her daughter. We decided to meet around ten a.m., so I’d bring a light snack but we’d be home in time for lunch. I figured we’d walk around, maybe visit the little fairy village and hunt for shells on the pebbly beach. But at 9:30, when I approach my son to put sunscreen on him, as I have done approximately 573 times prior, he freaks.

“No Mama! Not my face!” he shrieks. But sunscreen is the one thing I actually have down, I think. I even like to let the white smears on their cheeks show a bit—I figure it says, “Look, people, I remembered to put sunscreen on my kids! Where’s my trophy?”

After several minutes of trying to convince him to let me rub the sunscreen on his face, I too begin to freak. The more ballistic he goes, the more I try to reason with him. “We do this all the time. We’ve never got it in your eyes.”

“But we HAVE to do this or we can’t go to the beach!” I threaten.

Be a calm witness, a small, sure voice in the back of my head says. Logic isn’t working.

“Come on! Let’s get this on!” I spew, bitch-slapping the calm witness.

“Mama, can I have a snack?” my daughter whines from behind me. I stare at my son, and at my sunscreen-globbed hands.

It’s at this point that the calm, wise voice is replaced with yet another voice.

Maybe I’m just not cut out for this mom thing.

The thought settles in me, black and sticky.

It’s not a new thought. On the two days each week that I’m home alone with my kids, I’ve had that thought many times. As they get older, I have it less, but when I do, it’s devastating. After all, isn’t parenting the most important job of my life? I’ve given so much time and energy and love and money and so very much not sleeping. My career and earning power has diminished, my IQ has plummeted. My marriage has taken a backseat.

And above all, is the fact that I chose this. I so desperately wanted to become a parent.

But sometimes, it’s really miserable. Sometimes, I feel like I’m failing. Sometimes, I just want to stop changing diapers and catering to the conveyor belt of needs of young children: diaper, feed, play, sleep, repeat. Sometimes I calculate how many years until they’ll both be in elementary school (three) or how much it would cost for full-time childcare (a lot) or how much yoga and meditation it would take for me to simply be calm all the freaking time (infinity).

By the time I finally get the sunscreen applied, strap everyone into their car seats and head out, there’s no parking left at the island we’d planned on heading to. My friend and I decide to reconvene at another kid-friendly beach. By now, it’s nearing 11, and the light snacks I packed won’t be enough. We stop at a deli and I spend $13 on fruit cups and $3 on French fries. My friend calls to say that the second beach’s parking lot is also full, so we proceed to a third beach where we have to pay to get in. When we finally arrive, my kids are already sweaty and hungry and cranky—and so am I.

“It’s okay, Mama. You’re not being that mean,” my son says sweetly.

As we walk onto the hot sand of the bikini-ridden beach, it occurs to me that the jeans I donned for our “beach lite” trip are entirely inappropriate at this beach.

My daughter doesn’t mind, though. Before I can get her into her swimsuit and swim diaper, she is playing in the waves. “Come on, let’s get your swimsuit on!” I try to harness my agitated voice into a beckoning coo, despite the fact that I’m already exhausted and defeated and it’s only noon.

“NOOOO!” she hollers, then scoops her little hands into the ocean.

The thought hits again: Maybe I’m just not cut out for this.

For nagging and constantly trying to convince small, logic-immune people to get sunscreen and bathing suits on. To brush their teeth and put socks on and to use words instead of brute force.

A small wave of ocean curls over our toes.

I stare out at the water and I breathe.

And maybe these are just crappy moments. A series of hard moments that leaves me feeling drained and inept.

I stop thinking about the sunscreen battle and my daughter’s soaking clothes. I stand there with my children in the sunlight. The ocean on our ankles. They are so in the moment, while I’ve been worrying about wet clothes and sunscreen battles and lunch. I decide to drop the worries. Because we are here. They are young, and we are soaking in the ocean, so vast and fluxing. And my daughter, who a few weeks ago was afraid of the waves, now shrieks and giggles every time a blanket of water rises over her little feet. And because she has more light in her eyes than anyone I’ve ever met.

And my son. My son’s skin is golden brown despite the sunscreen that he finally let me spread across his face. And he has this white-blonde arrow of downy hair running down his neck, and somehow I’ve never noticed it before, and that brings me nearly to tears. Tiny globs of water make mirrors all over his legs. He is relaxed and beautiful, the wide ocean soothing him.

Here is what I know: everything changes.

Staring at the waves, watching my kids, I remember flashes of those early weeks of parenting. The cluster-feeding, when I thought I’d lose my mind if my son wanted to nurse again. The months and months of sleep-empty nights. The worries over what first foods to give him.

Even the labor pains that snaked around my back, turning me feral—even those were temporary.

When I was in each of those phases, it felt so hard. Like it would last forever.

The sunscreen battle? Maddening, but small.

Something else will replace it. Things that feel harder, even impossible—things like dealing with bullying and body image and sex and drinking and drugs.

And the ocean of child-rearing that seems to have no horizon? Somewhere, invisible but creeping up more quickly than I can imagine, there is land. The relentless days of nagging and battles and watching my reserves of patience drain and dry up will be over. The moments where I think maybe I’m just not cut out for this mom thing will fade. The bad days will soften around the edges, becoming blurred memories, along with the better days—piles of moments full of love and frustration. My daughter’s voice will morph from her squeaky sing-song into something new, something yet unheard. My son’s hands, warm and smooth, which I can still envelope in mine, will outgrow my own.

We’ve been handed a mythology about mothering. We think it will give us meaning, turn us whole, and we will love it, we will enjoy most moments of it. And yes, it gives us meaning. It balloons us with love. But it also turns us inside out. It’s filled with frustration and self-doubt and boredom. That breathing they teach in birthing classes? I have a suspicion that it’s more for actual parenting than the terrible but short-lived aches of labor.

And maybe I’ll remember this next time I’m knee-deep in a bad day, running on fumes of patience. When I want to run away to an island off the coast of Spain, sipping sangria and wearing a wide-brimmed sunhat, though I’ve never before worn a wide-brimmed sunhat. That it’s not just me—really, nobody is cut out for nagging and fielding demands and whining and battles all the time. That the tides are constantly shifting, even when we can’t see them. Our children are changing every time they breathe, their cells replacing themselves, their hair and nails lengthening, their brains zinging new pathways.

Stevie’s question still feels like the central question of my life. And yet, I am sailing. Just by breathing through it and not physically injuring anybody, I am living it, I am handling it. These bad days, the mundane, difficult days, are just moments. Moments that strung together with other moments, ocean moments and apologizing moments and cuddling moments, create a childhood. A mother. A life.

A life I am cut out for, even when it doesn’t feel like it.