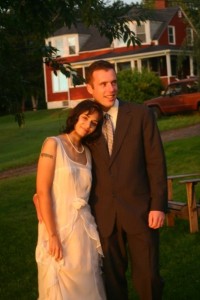 It rained on the afternoon of our wedding in 2004. Being from southeast Alaska, I had a backup plan; growing up in a rainforest, sunshine was a contingency plan, and rain was expected. The house we rented for the weekend had a screened porch that accommodated our two dozen closest friends and family.

So when it began sprinkling just before Scott and I were to get married, I felt disappointed, but not heartbroken. The green rolling hill outside with glimpses of the ocean would’ve been a nicer place to say our I do’s, but the screened in porch, which our family had decorated with roses and limes, was charming and cozy. Our loved ones huddled in to hear the vows we’d written for each other, and I watched their hands as they passed our rings around, a symbol that they would help hold our love and commitment to each other.

Just afterwards, the sky opened up, spreading a metallic glow across the yard, and we headed outside for our photographs. Scott and I looked at each other, amazed at the light.

We stood together beneath the dripping light.

Ten years have passed since that September day. We’ve lived in three different homes. We’ve had two children, and have lost several grandparents and a few friends. We’ve hurt each other with our words and our actions. We’ve coasted. We’ve gone to therapy. We’ve drifted so far I wasn’t sure we’d be able to edge back towards each other.

Since the kids, our lives have more love but less time. Less attention. Less energy. Sometimes it feels like between the four of us, someone is always in a bad mood. We promise we’ll make more time for each other, that we’ll steal away for more dates, and sometimes we do, but other times we don’t.

Sometimes it feels like all the magic of our early days has been squeezed out. The days when we felt magnetized towards each other. When we slept tangled together, and I worried there wouldn’t be enough time to fill up with each other, to know each nook and cranny of each other’s hearts and minds.

Scott and I argued over whether we’d all go to my aunt and her partner’s wedding. I hate to fly, and the only time we’ve travelled with the kids was full of frustration and tears—and that had been a week on Peak’s Island, a mere twenty minute boat ride from home. Though I wanted my family to be at my auntie’s wedding with me, it seemed like it would be easier to just go by myself. I secretly fantasized about going alone, allowing me to sleep in, to  sit in cafés people watching and writing.

But Scott wanted us all to go. He loved my aunties—as I’d began calling them two decades earlier— too. Before we got married, we’d spent a weekend at their gorgeous apartment in D.C. We’d had a blast strolling the nearby zoo, taking the Metro to the Smithsonian, and taking most of our meals at hole-in-the-wall neighborhood Mexican restaurant. But the highlight was hanging out with the aunties. One runs a high-profile theater in their city, and the other has done tireless work on behalf of Native Americans, women, and children. They’ve created a fabulous, rich, authentic life for themselves, and they throw off sparks, igniting those around them. And they’d made the trip to our wedding, ten years earlier, despite busy lives.

Besides all that, I was excited for my kids to see two women get married, and when my aunties asked if they would be flower kids in the event, the decision was made.

And so we went.

On the cab ride to the apartment we stayed in in D.C., I unknowingly dropped my phone. It had all the pictures of my kids from the time my daughter was born until now, thousands of pictures that I hadn’t yet backed up.

After sending a series of frantic texts to my lost phone, and calling the airport where we’d gotten the cab, I tried to let go. We hadn’t paid attention to the number or name of the taxi—it could be in any of a thousand of the taxis that come and go from the airport daily.

We walked the city streets, my hand reflexively reaching into my front pocket for my missing phone. Scott carried our two-year-old on his shoulders, and I wonder if she’ll someday have a sliver of a memory of the sensation of height, the feel of leaves on her fingers as she grabbed at trees.

We got caught in a rainstorm in the National Zoo, just after we passed the shaggy orangutans.

Our five year old had an epic tantrum in the middle of Adams Morgan.

Cab drivers from faraway countries drove us through the city, and our kids pointed to the Washington Monument each time we passed it. “Look guys! A castle!” our daughter exclaimed as she took in the sky-piercing tower.

I was sad about losing my phone, but without the distraction of it, I also was more present with my family as we walked the streets of D.C., so much more diverse than our home in Maine. Instead of checking my phone periodically, I stayed awake to the moments. I noticed how big our son had gotten, amazed that he’d stretched from a tiny baby, into a tall, energetic kindergartner. 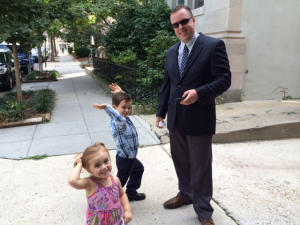 waiting for the cab to go to the wedding

Max and Violet launched the wedding ceremony by running out and tossing white rose petals onto the black stage. They both had huge grins on their faces as they circled the stage.

Scott and I watched the wedding with them after they’d spread the petals, cringing at the sound of Violet’s hands reaching into her Goldfish bag. My aunties faced each other, trading vows. The wedding and reception was so them—though they’d been together for nearly 24 years, the atmosphere was thick and contagious with love. I felt the warmth soaking into my skin, making me feel buoyant.

“Your kids were amazing! So full of joy!” a woman said to us at the reception.

“Oh my goodness, your children are beautiful. They so perfectly set the atmosphere!” said another.

“Your children are so good,” another one said.

And they were. They endured a long, lovely day surrounded by adults—the ceremony, the cocktail party and luncheon, the toasts and live music.

At home, some days are full of frustration. The tantrums, the demands, the frustration that comes from having an entire family of strong-willed spirits. But at the wedding, I saw my children as everyone else did—gorgeous, joyful, resilient.

That morning before the wedding, at Scott’s prodding, we’d taken a long walk to replace my phone. With no word back in over 48 hours, we figured my lost phone was either wedged into a cab seat somewhere, or someone had found it and decided to keep or sell it.

Partway through the wedding, my new phone buzzed with a text message, then rang.

“Hello. I found your phone in my taxi—I’m so sorry, I wasn’t working yesterday. Can I bring it to you?”

I looked at Scott and told him what had happened, shaking my head. I was due for a new phone anyways, so it wasn’t so much that I’d replaced the device. It was all those pictures. Image after image, the phone held pictures illustrating my daughter’s infancy and my son’s toddlerhood.

An hour later, the cab driver pulled up to the theater where the wedding was being held and handed me my phone.

“Thank you so much,” I said. “All my pictures of my kids are on there—“ I handed him a couple of twenty dollar bills.

“Oh, thank you,” he said. I was so touched by his simple act of kindness—he’d taken the time to drive from the airport to downtown, with no expectation of being paid. It was almost too much goodness—seeing my children so clearly, softening towards Scott, the thick love-filled air from my aunties, and a stranger offering a kindness.

“Have a blessed day,” he said before driving off.

Back at home, the glow from our trip and the wedding continues. Scott and I celebrated our tenth anniversary. We talked about how far we’d come, how good are lives are now. With our children now almost three and five-and-a-half, it feels like we’re passing out of one of the most intense stages of parenting, and into something slightly easier.

“Look at them,” I say to Scott sometimes, gesturing towards the kids. “Look what we made.” Knowing full well that it wasn’t just us—they are part us and also something so much wider, full of the secret strands that make them who they are, who they were born to be. I look at Scott, too, and think of this life we’ve made, how far we’ve stretched from who we were when we met, how much can transform in a decade, cells sloughed away and regenerated. When we stood on that porch as the rain fell outside ten years ago, we promised ourselves to each other. We didn’t realize at the time that over the years to come, we’d have to recommit to one another, over and over again. But we have.

What was once giddy love full of fantasies about the future has calmed into something else. A rooted love, a family doubled, deeply into the future we’d imagined. When I can peer through the frustration, and fatigue, I can see it: these are among the best days of our lives.

I know this bronzy time will pass. This golden hour will sink into something else. I’ll forget to be amazed at this life, at this richness. Life constantly moves, and like most of us, I struggle to let go and move with it, to be flexible and loose-handed. To bend and yield with some semblance of grace.

But for right now I’m holding that light in my chest, in my hands, in my eyes. Our family is healthy and strong. The week we returned from D.C., Scott and I both said to ourselves, at separate times: I love my life.

Right now, I see Scott and the kids and even myself more clearly. I say thank you just under my breath. I am giddy with love in a different way, a way that feels full and ripe and in its impermanence, is almost too much to bear.

Right now, just like that afternoon ten years ago, everything glows. 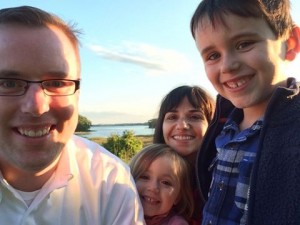