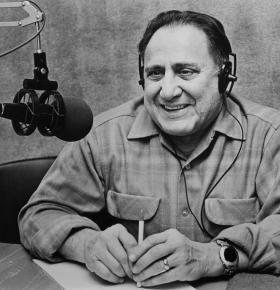 Picture from the Juneau Empire files
For my grandfather, Bill Ray
These are the sounds after a quick death following a long life: The telephone rings are steady, but not constant. Arrangements are made swiftly, with no big decisions, discussions or surprises. Voices are calm. You hear a lot of sighs. Only a thin layer of shock drifts by, like a cirrus cloud.
My grandfather lived to be 91. We loved each other and said so in later years, but we didn’t speak often. He was strong-willed and difficult with those he loved the most. He was a storyteller and a lawmaker. A liquor hawker. A secret-keeper and a gold collector. He was a name caller. A fisherman and a painter and a writer.
He was a child of the universe who was here, and now isn’t.
A constellation of ancestors, long twists and turns of accident or fate. A mother’s eyes, a grandfather’s nose. The birth name, Will, that he grew into, but later changed.
My best memories of him are when he told stories. He sits at a table, one hand on his coffee mug. He is already laughing, his eyes shining with anticipation. “This is a good one,” he says. “Wait until you hear this one.”
It’s the one where his father’s dog, Whitey, fell out of the fishing boat, perilously close to the falls. “‘What’d you do, Dad?’ I asked him.”
‘I said, So long, Whitey!”
He shakes his head and chuckles, his laugh still sturdy among the laughs of his listeners.
I wish I had listened better, had a better memory. I wish I’d written the stories down instead of letting them sing by, all wisps and trails. I wonder where do all those stories go when we die? Do they live on, swirling and hanging in the air where he was? In the cells of his great grandchildren who he never met? In the pages he wrote?
“Reaaad boooook, Mama,” my daughter says, pattering over to me.
She hands me Goodnight Moon. Her eyes are big and blue, her cheeks full and smooth. I start reading, my eyes taking in the flat greens and tomato reds of the book. By the time I get to And a comb and a brush and a bowl full of mush, I am in tears.
All those goodnights. The words of the book, a childhood favorite, reach back through my mind, unlocking the little girl inside of me. The one whose grandpa was larger than life, full of laughs and stories. He was big and handsome. He slipped her sips of beer in the kitchen. Sent her postcards when he travelled. He appeared on the radio and TV, making jokes and laws.

These are the sounds after a good death: Quiet sobs. Voices on the phone, shaky, but not shattered. Patter of small feet, new tales unfolding. Goodnight stars, goodnight air. The rush of memories, of stories, rising and falling, lifting into the sky.