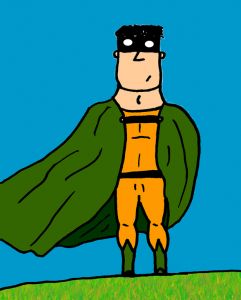 In a wildly generous move, my cousin offered me a free photo shoot with the photographer she works with. So this Wednesday, I met up with cousin Meghan and Kevin Ouelette, photographer and DJ at Amazing DJ Music, Sound and Photography.

Getting my picture taken is not my favorite thing. Despite the fact that I can air many of my vulnerabilities here, there is something about being photographed that makes me feel so very naked. Not in a good way.

I was that painfully shy kid growing up. I kept my lips pursed and my head down, slouched in a desk at the back of the classroom. I internalized most of my emotions. I thought I was fat and ugly and therefore unlovable, so I hid. The more I hid, the more I became convinced that I wasn’t worthy of being seen.

Add to that a mysterious talent for closing my eyes at exactly the same time as the camera clicks.

Fortunately, Kevin had a way of putting me at ease. After greeting me with a warm hug, he asked, “So tell me what you don’t like about yourself.”

I thought for a moment, trying to figure out where to start. I began listing my physical flaws.

“I have a nose smile,” I confessed, referencing the little slash that blooms beneath my nose when I grin. “And sometimes in pictures I look a little cross-eyed.” I almost started in on my “strong” nose, and hadn’t even gotten to body parts below the neck, but Kevin was ready to get started.

As Kevin drove, we chatted about my writing so he could get a sense of what to capture in my photographs. I told him I wrote mostly about parenting and grief and spirit, and that— SPOILER ALERT!— I was working on launching a new website. Our conversation flowed easily, and I felt instantly comfortable.

What impressed me most was that Kevin operated purely on instinct. He drove around for awhile, then suddenly said, “I’m feeling like I want to park here and walk around.” So we did. Because he trusted his instinct, I did, too.
He asked me to sit on the front steps of a stranger’s house, which would normally leave me feeling anxious. But I didn’t feel anxious. It felt like we were on a fun little jaunt, instead. “Think about elephant bums,” he said, pointing his camera at me.
As if summoned by a camera-wielding wizard, a big, genuine smile spread across my face.
We continued that way, walking and chatting our way through a neighborhood of lovely old houses. We paused at various stoops, stairs and fences per Kevin’s hunches. I cheerfully envisioned the nether regions of pachyderms while Kevin snapped away. I wasn’t thinking of my nose smile at all.
“So how long have you been doing this?” I asked.
“About three years,” he said.
“Wow. And you have no traditional training?”
“None.”

I was stunned, having seen some of his gorgeous photos on Facebook.

Kevin shared that capturing the essence of people was his superpower. He grinned, as if thinking of elephant bums, while he expressed how amazing it was to produce images that helped people feel good about themselves. The way he said it was devoid of ego—he sounded almost surprised that he had discovered this ability. It made me feel happy—what a wonderful way to be able to make people feel good.

At one point, he was photographing me from my left side. “You do have a bit of a lazy eye,” he said.
Though I died a tiny bit inside, and briefly doubted his claim about making people feel good, he said it with kindness and objectivity, as if proclaiming that I had a strand of grass in my hair.
“You knew that, right?” he said, concerned that he had surprised me.
“Sort of.”
After about forty-five minutes of walking and shooting, we headed back to his studio. “You know that this whole time, you’ve only talked about your imperfections? Which aren’t really even imperfections—you just perceive them that way.”

Back at the studio, Kevin scrolled through the images he’d taken, selecting favorites. We swiftly narrowed it down to our top four favorites, and then he began lightly editing them. “Turn this way,” he said. I did. “Do you have some carrot in your teeth?” he asked, an eyebrow lifted.

“Oh, dear God.” I stared at his computer screen, where a big chunk of carrot was wedged between my back teeth. I watched as he digitally flossed my teeth.

“Hmm. Show me your other side,” he said, again referencing my teeth. I did. He started laughing.
“Maybe you can photoshop a little bunny into the pictures, going after all the carrots,” I suggested.
I silently made a vow that if I ever had my photo taken again, I would floss beforehand. Twice.

As Kevin worked on the photos, I sat there thinking about imperfection. About my Forest Whitaker eye and my carrot teeth and my nose smile. When I zoomed out and focused on the whole picture, the photos looked really, really good. So why was I focusing on the imperfections, which we all have?

“Which one is your favorite?” Kevin asked.
“That one,” I said. I liked the little orbs of light in the background. 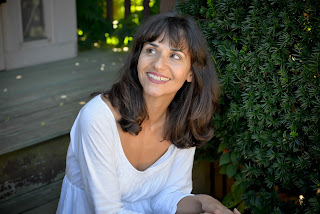 “Really? That’s actually my least favorite. I think you look a little inhibited in that one,” he said. “This is my favorite. I feel like it really shows who you are.” 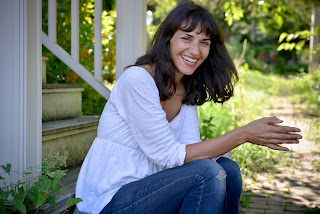 Later, my mom would declare that Kevin had “captured my essence,” in that photo.

Ever since I left the studio, I’ve been thinking about superpowers and imperfection.

It occurred to me afterwards that one of my superpowers is that people often feel really comfortable sharing personal things with me. I frequently hear, “I don’t usually share stuff like that with other people.” Just the other day, I was getting some bodywork done and the practitioner, who is highly professional, ended up sharing some very personal issues her family was facing. As I was leaving, I said, “I’m really sorry you’re going through that.”
She looked a little alarmed. “I don’t usually share stuff like that with my clients.”

In retrospect, during my visit, I’d been vulnerable with her and had talked about my issues with anxiety. Though my focused attention on my own flaws causes me a lot of discomfort, I think that my ability to openly share those flaws might be related to my tendency to make other people feel comfortable. Because I am fairly at ease with removing my social masks, other people feel like they can go ahead and lower theirs a bit, too. It’s not unlike how I trusted Kevin’s instincts because I could tell that he did.
So much of my personal growth work is about accepting the whole deal. The grey area. The AND. The carrot teeth AND the photo that I love. The superpowers AND the vulnerabilities, both of which our world desperately needs. And seeing that sometimes, sometimes, they are actually one and the same.
What’s your superpower?
Tweet
Pin
Share15
15 Shares
« Guest Posting at the Elephant
A Good Death »