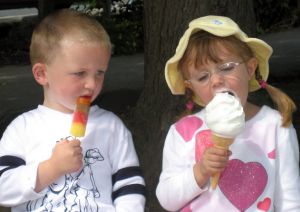 Image by Hazel Bregazzi
If my four-year-old son, Max, had his way, I would never:

Hug anybody besides him and Violet

In a way, I get it. I am a jealous person; ask my husband. Except don’t ask my husband, or I will gypsy curse your ass. Seriously, step away from my husband.
A few weeks ago, a dear friend who I hadn’t seen in a year came over with her son. Without thinking about it, we embraced. My son instantly heaped himself onto the floor and began screeching. Eventually, I could make out the words.
“NOT A GOOD IDEA TO HUG!” he bellowed.
From then on, he was wary. “Not a good idea to talk,” he said when my friend and I were chatting in the kitchen. “Not a good idea to laugh,” he hollered from upstairs as we swapped parenting war stories and giggled.
At a birthday party a month ago, anytime I dared to talk with the birthday girl’s mother, another good friend, Max didn’t say anything. He just stomped up to us and performed a karate chop between us with his hand. It reminded me of those old Ginsu knife commercials.
“It’s hard to share Mama, isn’t it,” I say to him, nodding. He narrows his eyes at me. “Mama has enough love to share, Maxie.” I say these words over and over, with slight variations, whenever these jealousy flares occur. Sometimes the jealousy makes me feel bad, because it’s clear that his hurt is real to him. Sometimes I have to hide my mild amusement, such as when he debuted his karate chop technique. Other times, his reactions are just plain annoying.
A few Saturdays ago, we went to Sebago Lake with Max’s godparents. Max happily splashed around and flirted with his godmother. Then, his godmother invited me to paddle around on floats with her. We headed to the dock, where I slowly lowered myself into the water, allowing it to swirl above my bellybutton. Finally, proud of myself for venturing outside of my comfort zone, my friend and I kicked and floated in the lake, giggling. The water was a welcome respite from the 90 degree weather and I felt like a little kid.

Until I heard my little kid screaming from the shore. He had spotted us. My sins were numerous: having fun. Laughing. Talking to someone else. Being beyond Max’s reach.

There was nothing to do but continue floating and paddling and let Max be pissed.
And pissed he was. When we reached the shore again several minutes later, he met me in the water and proceeded to slap and splash me. At one point, he even lunged towards me with his lips peeled back like a Doberman pincher, and I had to dodge his rabid bite. “Maxie, I know you’re mad. I can see you’re really, really mad,” I said. “Arrgghgharrr!” he responded, continuing to flail his arms in my direction.
After a lot of splashing and hollering (mostly Max) and coaxing and a popsicle, Max finally calmed down. There was another brief incident where he popped his penis out of the top of his swim shorts and announced, “Can’t make it!” (to the bathroom) and the hollering began again, but with nudity incorporated.
Eventually, we coerced him into his clothes and got in the car, where he slumped into naptown.
When I’m not annoyed or humored or empathizing with Max’s jealousy, I’m wondering if there’s something it can teach me.
How do I react when I don’t think there’s enough of something or someone to go around? Enough love or money or time? Enough attention?
Does my rational brain shut down, leaving me anxious and internally collapsing in protest?
Maybe Max is acting as a mirror for my own jealousy. Maybe he’s offering a chance for me to see how ridiculous envy is. How jagged and narrow, a shard of mirror casting a warped image. Maybe it’s a chance to remember how expansive life is. How much of each of us there is to go around. To hear my own words to him: Don’t worry, sweetie. There is enough.
Tweet
Pin
Share
0 Shares
« The Truth about Vacationing with Young Children
Connections »