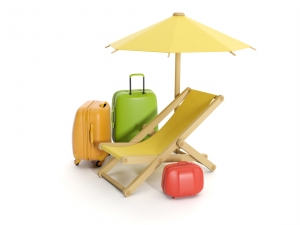 Yesterday, I stood outside and chatted with a friend whose children are the same age as mine. She was getting ready to leave for a family trip. As she talked about staying in a hotel room with the kids and how she and her husband would probably have to go to bed at the same time as their children, I thought she sounded a little stressed out.

“It sounds a little stressful,” I reflected.
She agreed. She mentioned a few other aspects of the trip, which involved both a family reunion and a memorial service.
I leaned in and said, “It sounds really stressful.” I paused for a second. Our oldest sons were tackling my daughter, Violet, on the driveway. I stepped forward, ready to rescue her. “Gentle, you guys!” Violet, though, was smiling as she rolled around in the dirty asphalt, the two boys embracing her.
I turned back to my friend. “It sounds super stressful,” I said again. “Honestly? I think travelling with small children is hell on earth.”
She glanced at me, then nodded.
As soon as I had uttered the words, I felt a little burst of energy. The kind that comes when you’ve been holding a quiet truth inside you and you finally let it out into the sunlight.

My husband and I held off on travelling with our children until last summer, when our son Max was three-and-a-half and Violet was six months old. Besides a quick 16-hour getaway during my pregnancy with my daughter, we hadn’t vacationed since our son was born.

Some of it was because of finances; my husband changed careers right after our son was born, and I became a stay-at-home mom. We didn’t have a lot of disposable income. But mostly, we were overwhelmed enough with life with tiny kids at home. The effort required for travelling just seemed like too much work. Thinking of security checks and suitcases and time zone changes while dealing with little children made me sleepy; I get overwhelmed enough just packing up for a day at the beach.
I had watched with awe as friends whisked their newborns and toddlers away on airplanes to the Caribbean and Florida and the Midwest, and as others embarked on long road trips with their little ones. I thought of all the family vacations we took when I was a child growing up in Alaska. A collage of hazy, bright memories from those vacations lives in my memory: feeding frozen peas to tropical fish at Hanauma Bay in Hawaii, paddling around in a skiff on an Alaskan lake, the flashing lights of arcade in Oregon.
Last summer, we decided to finally give travel a whirl. I made compulsive lists of all the things we would need, and I frantically checked them off in between little anxiety meltdowns: ohmygod we’re not going to have enough fruit! I almost forgot the wipes! My husband gently reminded me that we would have access to supplies on the small island we were headed to. We jammed up our car with groceries and sunscreen and diapers and headed to the ferry terminal. 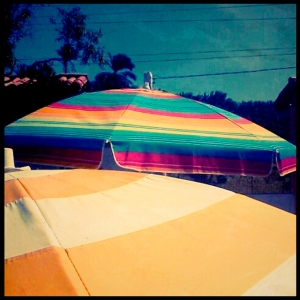 We were doing it.

Taking a leap. Vacationing, like real grown-ups do with their small children! A chance to escape the mundane chaos of home. We headed all the way to Peaks Island, a twenty minute boat ride from our home in Portland.

We rented a house on the beach on the island where my husband grew up. His parents still live there, and his brother and sister and their families were spending the Fourth of July week there as well.
As we unpacked, the first thing I noticed was that I had to carry my daughter. All. The. Time. At home, I had little stations set up to contain Violet. There was the exersaucer in the kitchen where I put her so I could “cook.” The swing in the living room where she napped. The bouncy seat in the bathroom that allowed me to shower while she happily jiggled up and down. I had brought none of these tools with us. She had not quite learned to sit on her own, and if I put her down she would usually topple right over.
Then there was our son, Max. Our strong-willed preschooler who likes things to be predictable. Bereft of the routines and boundaries of home, he took to darting out the screen door of the beach house. Once, while I lugged our daughter around, my husband became frantic to stop Max. He blurted, “There’re monsters outside! Come back in right now!” Max’s eyes widened, and for once, he listened.
Max also got so relaxed on vacation that he took to naked snacking. We have a picture of him perched on a bar stool in the kitchen, eating a cereal bar in the nude. While charming, he was not yet potty trained at the time, and I wondered what toddler scat might mean for our security deposit.
Also, there was sleep. The lack thereof. Neither of our kids were good sleepers to begin with. Whisking them away from their normal bed and crib did not help. Our daughter began teething the moment the boat docked.
There were also environmental issues. The ad for the vacation house had not shown the narrow spiral staircase right in the middle of the vacation house. Trying to keep Max away from it was tiresome. And every time I carried him up the stairs to where our bedrooms were, I envisioned both of us crumpled and lifeless at the bottom of the stairwell, a vacation gone terribly awry. To top it off, the owner of the house popped up around the property throughout the week of our stay. Perhaps he needed to monitor the rusting graveyard of dead cars and boats that lined the property.
I knew that our first vacation with children wouldn’t be like vacations of the past. I knew I wouldn’t have the opportunity to read a stack of books or take naps or have some afternoon sex. But I still hoped we would have a chance to rejuvenate.
Being kangarooed to my daughter while my son attempted to escape into the Atlantic Ocean and the homeowner crept around the property did not feel rejuvenating.
Vacation was just like being at home. We changed diapers and fed the kids every few hours and tried to get them to sleep. It was just like home but we had to pay hundreds of dollars for the rental house. It was just like home but without the exersaucers and routines and toys. It was just like home but with a spiral staircase of doom and a looming landlord.
To be fair, we had some lovely moments. We had lots of cookouts with Scott’s family. We watched Max and his cousins prance around the beach most mornings, and everyone was happy and playful in the sea air. Max drumming on the big rocks by his cousins’ cottage on the back shore. Max still talks about our vacation. He remembers the ocean and how he used the butterfly net we found in the vacation house to catch candy at the Fourth of July parade. 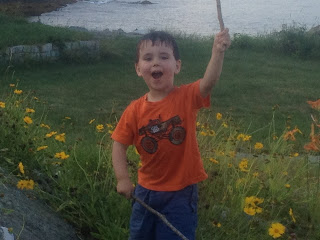 Maybe other families have more docile children or are better at managing their own expectations of vacationing. Maybe my own parents were able to hide the frustrations of travelling as a family so I could capture the positive memories I have. Or maybe the hardest parts of travels fade like the body memory of labor pains, leaving you thinking that wasn’t really so bad. I could do that again…

But this summer, we’re staying put. We’re going to the beach and the aquarium, to splash parks and lakes. But no overnights. Perhaps in a few more years we will venture out again. When both kids are more likely to sleep and can help haul their own luggage. When they don’t need constant supervision from the crack of dawn until sunset. And several times in between. Or we could wait until we can go to one of those fancy family resorts that offers child care—and figure out a way to not feel guilty when we pawn our kids off on strangers so we can have grown up fun.
Or maybe we just need to learn to roll with the punches a little better. To be more like my daughter, who can be sandwiched between two rambunctious four-year-olds, covered in driveway detritus, and still smile.
Tell me the truth… do/did you really enjoy travelling with young children?
Tweet
Pin
Share
0 Shares
« Hot Yoga
Hey, Jealousy »