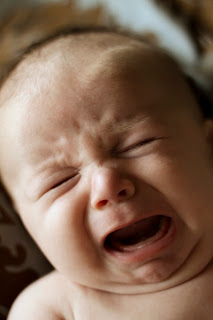 When my son was a baby, I wanted answers.
This new little red-faced infant wanted to nurse every twenty minutes. Max was up six times a night. The ‘quiet alert’ phase that we heard about—the one we imagined where our peaceful, silk-cheeked baby would silently gaze at us—was non-existent.
Long days dripped by in a haze of milk and tears—both of ours. Our pediatrician said that he didn’t have colic because he could be soothed by nursing. And Max didn’t save his sadness for just the witching hour—any hour of the day or night was fair game. In my attempts to ‘fix’ my son, I lugged him to osteopaths and homeopaths. I went on an elimination diet consisting of brown rice and carrots. I spent hours with him hooked to my breasts while I surfed the internet for solutions. For a way to make him happier. To make us both happier.
I came across an article by Dr. Sears, a leading proponent of attachment parenting. In the article, Dr. Sears described ‘High Needs Babies.’ These intense babies tended to sleep poorly and required constant holding and attention. Max fit ten out of twelve of the criteria. The article suggested that it was possible that my son’s temperament was just who he was, who he was born to be. Not something to fix. I was a bit devastated by this theory; if I couldn’t fix it, the tears and sleepless nights would continue. We were already utilizing many of Dr. Sears’ suggestions for calming the ‘High Needs Baby’—co-sleeping was the only way for any of us to get any rest. I carried him in the Ergo so often that I felt like the straps were melding with my skin. I nursed on demand—and the demand was high.
The only thing that really helped was time. Ever so slowly, our nursing sessions stretched out. After about sixteen months, Max finally started piecing together four or six hour stretches of sleep.

Max is four and a half now. He’s been weaned for a few years now, and he usually sleeps through the night. But he is still intense. When he’s happy, he’s down-to-the-toes effervescent. And when he’s not—which is often— he’s shrieking, writhing puddle on the ground miserable.

We have a daughter now, too. She smiles and laughs easily and often. Loud sounds don’t phase her, and she weaned with little effort. At 21-months, she still requires a lot of care. But her whole being vibrates with ease, with lightness. I sense that life is much easier for her than it is for my son.
Than it is for me.
You see, I’m a High Needs Mother.
Before my kids were born, I practiced extreme self-care. I went to yoga and dance classes. I attended twelve-step meetings and therapy. I took long walks and joined a Unitarian church. I signed up for retreats and workshops. I did all of this to help me simply feel normal, which has always seemed much easier for most people than it did for me. Maybe it’s because I’m an introvert. Maybe it’s because I struggle with anxiety and depression. Maybe it’s because I’m what Dr. Elaine Aron describes as a ‘Highly Sensitive Person.’ Or maybe I’m just in touch with myself, and aware that humans weren’t really designed to withstand the fast-paced, over-booked life that much of the western world thrives on.
My husband and I vowed that when we had children, I would keep up my rigorous program. We promised we would support each other in doing the things we loved and the things that kept us sane and happy.
And then my son arrived.
And I was the only one who could sooth him.
I fantasized that my husband could induce lactation so my nipples could get a break. I pumped milk during the three minutes a day that my son wasn’t nursing. After a few months, I went to a yoga class by myself. As I backed the car out of the driveway, I felt half giddy to be on my own, and half naked, because my constant companion wasn’t strapped into the empty car seat in the back.
At the class, I breathed. I tried to root my body on my yoga mat, to let the ground cradle me like I so often cradled my son. In between surrendering to gravity, my mind wondered how my son was. If he was screaming. If he would take the bottle. If he would nap. During the closing shavasana, I felt the sharp zing of my milk letting down. In those days, I rarely went an hour without nursing. 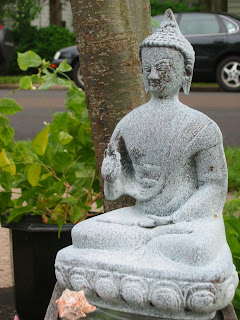 I kept attending yoga classes, though I’d often return home afterwards to a sobbing child and a frustrated husband. The classes were a small burst of freedom, but it wasn’t enough. I fantasized about the day Max would start kindergarten, the day’s hours stretching ahead, all mine. But kindergarten was still years away. Between working so hard to meet my son’s high needs, and my inability to take care of my own, I felt withered.
When my son was twenty months old, we discovered that my husband’s work would subsidize part-time child care. We enrolled Max two days a week in a nearby daycare. The guilt I felt was expansive. I had wanted children, badly. So why did I so need to be away from my son? And how dare I ask other people to care for him two days a week when I wasn’t going to be filling all of that time with paid work? When I might use some of it to go to a yoga class or do laundry or lug my laptop to a coffee shop and write?
My guilt was huge, but my need for a break was bigger. When I dropped my son off that first day, I came home, melted onto the couch and cried. When I finally peeled myself off the couch, I wrote Max a letter. In my home, alone, all I could hear was the hum of electricity. For the next several hours, my body was all mine. I felt guilty and blissful, free and lost.
With time, the guilt shrunk.
I hate that as a mother, I felt like I had to choose between caring for my child and caring for myself. Because really, I can choose both. I can teach my kids—by example, which is perhaps the most potent way of teaching—that they are worthy of listening to their own needs. To the quiet, still voice that might tell them they need a break. That they need to lie on a yoga mat and sink deep into their own body and breath. To wander through a cemetery, alone, slow enough to read the names on the gravestones. To sit down and write about how they’re feeling, or to surrender to sweet sleep for an hour.
Maybe you don’t need to hear this. Maybe you are a working mother who longs to be home with her kids but needs the paycheck. Or a stay-at-home mother dreading your child’s first day of kindergarten. Or a home schooling mom who finds that the daily tasks of child-rearing light you up from the inside out. I honor you. We are, like all humans, all mothers, the same but different.
When I take good care of myself, I am more present for my babies. I can play air guitar with my son and orchestrate dance parties to Footloose. And when I don’t take care of myself, I’m a stringy, soggy, limp wash rag of a mother. Slowly, over the years, I have been able to add more and more self-care back into my life. To come back to myself and meet my own needs.
Over time, I learned that there was nothing wrong with my son. He just happens to be a lot like me.
Tweet
Pin1
Share10
11 Shares
« This
. Lighten Up »