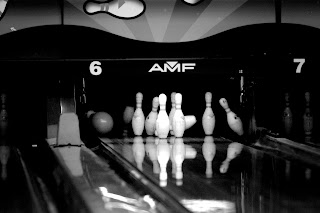 Yesterday afternoon, Scott, Max and I went candlepin bowling. We were all excited about the rare chance to spend some time together doing something that would be challenging with our toddler in tow.
Something that most people don’t know about me is that get very competitive when playing games, which vacuums all the fun right out of it for me and those playing with me.
I managed to hold myself back during bowling. I will admit to smugly thinking I was winning the whole time, only to realize at the end that I was looking at Scott’s score, not mine. The mild deflation I felt was redeemed by knowing that Max had a blast, slamming the small balls down the lane, equally distributing them between the left and right gutters. In between turns, I sipped my ice coffee and looked at Max, trying to figure out once again how he morphed from the tiny, red-faced infant into a small person who could walk and talk, play the drums and bowl. Earlier in the day, Scott had told me I needed to, ‘lighten up.’ I was trying to take his words to heart. Trying to be present.
After we finished the thread of bowling, we migrated to the small arcade behind the lanes. Max wanted to play air hockey. I was delighted, as I love air hockey. And by love, I mean it sends me into a frenzied fight or flight cortisol party, where my pulse ramps up and I slam the puck around as if fighting for my very life.

Which would be okay, except I was playing against my four-year-old. “Too fast, Mama!” he whined.

Thwack.
I couldn’t slow down.
“I want to play with Dada instead!”

I reluctantly handed the paddle to Scott and positioned myself on the sidelines.

Scott and Max gently passed the puck back and forth, back and forth.
Oh, I thought.
Slap.
Maxie giggled and cheered as he scored on Scott. “Yay, Maxie!” I yelped.
Slap.
Maxie and I cheer again. Scott made a pretend pouty face.
It was at this point that I realized Scott was letting him score. The thought never would have occurred to me while I was playing.

“Mama, do you think you can chill out a bit and play with Max again?” Scott asked.

“Of course. Sorry, Max. Mommy gets a little excited when she plays air hockey,” I said. “I’ll relax.”

I glance at my sweet, fiery four-year-old. So big, yet still so little. Lighten up, I thought.

But the minute the paddle was in my hand, my wrist flicked, firing the puck off the sides of the table and slap, right into Max’s goal slot.

“MAMA!” he cried, throwing himself onto the carpet.

With my head down, I silently handed over the paddle to Scott.

Lightening up, relaxing, having fun—these are challenges for me.
Later that night after we picked up Violet from daycare, I had another opportunity.
Max loves music. It is like breath for him, and it has been since he was an infant. We encourage his passion, though it is often very, very loud. For reasons that I can’t quite explain but blame solely on Scott, lately Max has been into “Africa” by Toto, circa 1983. Most nights, he asks to watch it on Scott’s iPad while he slams away on his drum set.
Last night was no different. Scott put the song on.
I hear the drums echoing tonight

We huddled around the drum set while Max crashed about on his drums with abandon, not unlike the way I had become possessed with the air hockey paddle in my hands only hours before. I listened to the song, which somehow sounds better and better each time I hear it. Which is often. The melody washed over me as I watched the musicians on Scott’s screen, and I found myself swaying.

Hurry boy, It’s waiting here for you
I listened and I watched. I didn’t even stop to make any jokes about the curly 1980’s mini-mullet on the lead singer’s head.
Or the keyboard player, who looked like this:

Without really thinking about it, I zoomed upstairs and may have came back looking like this: 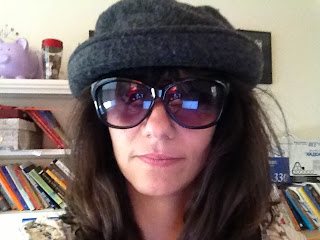 I seek to cure what’s deep inside, frightened of this thing that I’ve become
I lightened up. I grabbed my son’s keyboard and rocked the hell out. Of course, even as I was lightening up, I was thinking, Hey! I’m lightening up! This is me, lightening up! Hey, do you guys see what’s going on here? I’m all light and stuff! Weeee!
We played the song another time or two, and then the day was done. Without too much ado, the kids were in bed and quiet. I collapsed onto the couch to watch some Netflix. We had bowled and air hockeyed and rocked out. I had possibly found the seed of an idea for my Halloween costume. I settled into a long, deep sleep. Lightening up is hard work for some of us.

How do you lighten up?